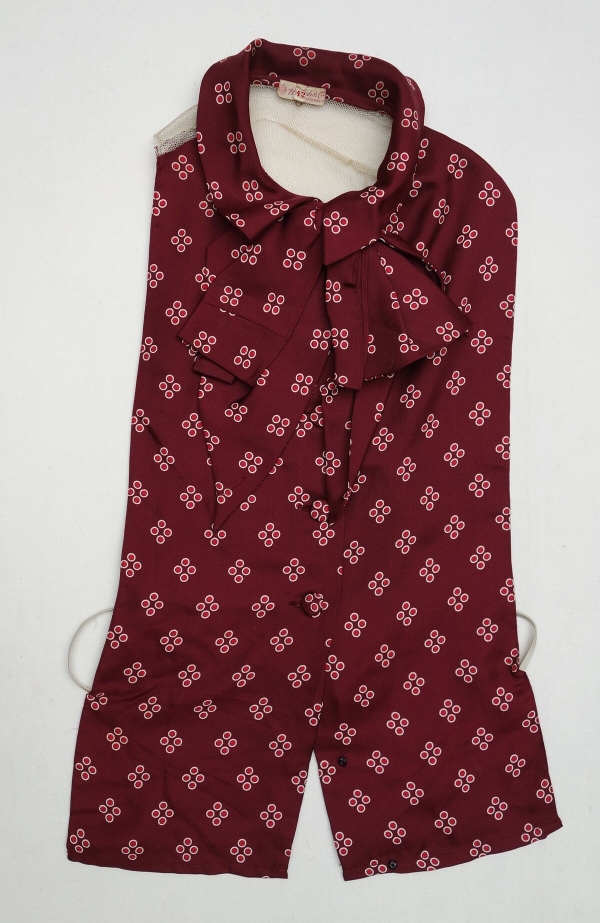 Front of a woman's blouse, sold by the (Jewish) firm of Hirsch & Cie, Amsterdam, before 1943. TRC 2007.0885
Published in Textile tales from the Second World War

As early as 1940, the German occupying forces introduced an administrative division between Jews and non-Jews, after which more and more restrictions were imposed on the Jews.

From the beginning of the occupation, Jews were socially excluded: they were only allowed to go to Jewish shops, theatres, etc. In February 1941 there were some protests against the exclusion of Jews, of which the February strike in Amsterdam is the best known.

Expropriations in the textile industry

In March 1941, the Germans issued an ordinance expropriating Jewish businesses. Some of them were taken over by "Aryans", but most were simply closed. Nearly half of the expropriated Jewish businesses operated in the clothing, upholstery or textile industries.

One such company was the fashion house of Hirsch & Cie., which was named after its original founder, the Jewish entrepreneur, Leo Hirsch (1842-1906). Hirsch & Cie. had offices in several countries. The Amsterdam branch was located at the Leidseplein and sold haute couture clothing. For the firm of Hirsch & Cie, see also a separate TRC blog, 'Hirsch & Cie, and war-time textiles at the TRC', Leiden (Gillian Vogelsang, 18 April 2019).

At the beginning of the war the company adapted, at least outwardly, to the new regime. It advertised in collaborationist magazines and newspapers, organised a fashion show aimed at German tastes and sold garments that followed German fashion. As the war progressed and textiles became scarcer, the company, like most other clothing companies, focused more and more on repairing and altering clothing. The TRC houses a front for a blouse. It has a label: "Hirsch & Cie Amsterdam, size 42", but the number was deliberately placed over the name Hirsch in order to hide it.

Star of David (Jodenster), worn during the war by Jewish people in German-occupied Europe. This example was worn by Zus Spits-Wijnberg, who in 1944-1945 was hiding in Ede, Gelderland, with the grandparents of Prof. Bas ter Haar Romeny, chairman of the TRC Board.Due to the expropriation, the company's Jewish directors were forced to leave in 1941. Many of the Jewish workers were arrested, transferred to transit camps such as Westerbork in the east of the country, and, in most cases, eventually to the Auschwitz / Birkenau extermination camp. Few came back. In 1943 the Hirsch & Cie building was officially closed. The company was reopened after the war, but it never recorded its former size or importance within the Dutch fashionable world.

In May 1942, the Germans forced Jews in the Netherlands - as in other occupied countries - to publicly wear a yellow Star of David on their clothing, on the left side, at chest level.

Browse through the exhibition: « 4. The Dutch textile production 6. Silent resistance »
back to top